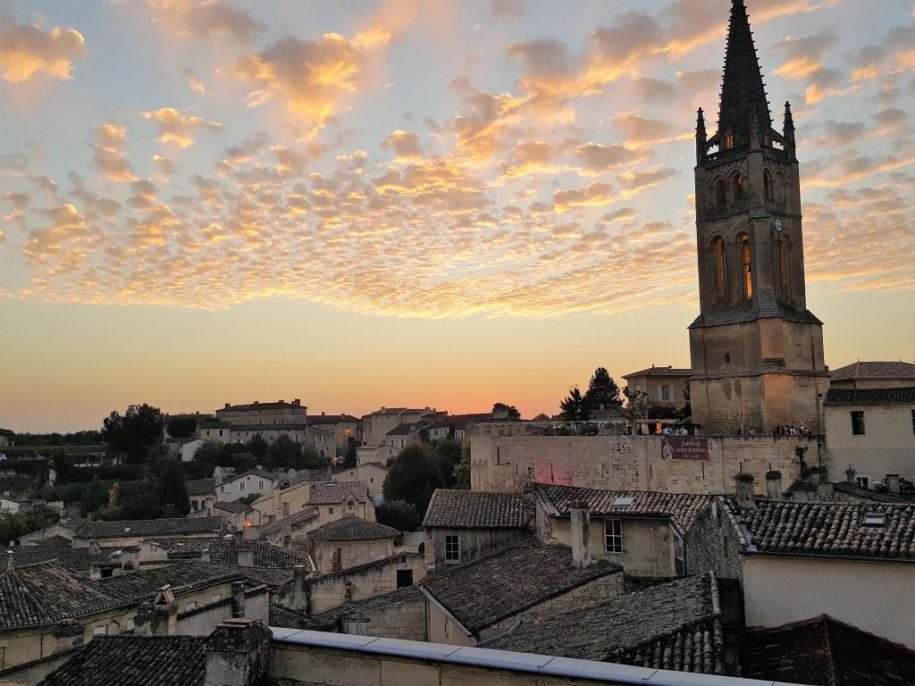 1300 years ago, a remarkable man- famous in his native Brittany for having performed many miracles- made his way south in search of a place where he might settle and dedicate his life to prayer. He chose a small settlement on a hill north of Bordeaux. The settlement was previously known as as Ascumbas; little did he know that it would in fact be his name that would become known around the world, adorning the labels of some of the most prestigious wines the world has ever produced.

By the time this monk arrived, the trade that would make his name famous had already been cultivated since as early as the second century. The poet and Roman consul to Gaul, Ausone, is rumoured to have owned an estate and some vines on the slopes of Saint-Émilion, hence the name of the famous Château Ausone. Some believe that this was the site of his winery.

Regardless, it was the monks who followed Émilion to his newly-built hermitage that began commercial wine production in this region, a production which made the fortune of the town that blossomed in the medieval period under English rule.

In 1999, the village was listed as World Heritage Site for its cultural importance, notably for its historical traces and importance in the world of viticulture.

The history is visible everywhere. A walk around the town is a trip back in time. The village is peppered with landmarks such asthe old defensive watchtower la tour des rois, the old monastic cloister on top of the hill that produces effervescent wines, a giant arch among the vines that hints at the size of the monastery that once stood there, and then there’s the pièce de résistance: the monolithic church that dates from the 12th century.

The cultural history of the village is rich, but even this is almost outshone by the history of the many vineyards that have made the name Saint-Émilion famous around the world.

What’s special about the wine?

Like most Bordeaux right bank wines, the ones produced in Saint-Émilion and its satellites are merlot-dominated blends. They generally are composed of 60% Merlot, almost 30% Cabernet Franc and approximately 10% Cabernet Sauvignon.

That said, the range of soils across the appellation creates an enormous diversity in the wines of Saint-Émilion, perhaps the largest diversity found in any of Bordeaux’s appellations.

The majority of châteaux ranked higher up in the Saint-Émilion classification are found on the limestone-rich plateaus under and around the village. As you get to the bottom of the slopes the soil becomes gravelly and sandy, which changes the characteristics of each grape varietal, as does the clay found under the topsoil on the eastern side of the appellation. Hence the importance of the appellations!

How can you tell which are the best?

The classification system here is often compared to the Bordeaux Official Wine Classification of 1855, a system used for ranking the wines on the other side of the Garonne. The left bank system hasn’t changed in over 160 years, with a very small number of exceptions.

If you’re not already sold on the history, the culture, the village is a tourist hotspot for its artisanal shops and gastronomy. Michelin-starred restaurants are dotted around the area, including in the centre of the village. Artists, knife makers, carpenters and macaroon bakersline the charming old streets and the rocky paths that connect the lower and higher parts of town.

It’s a wonderful place to take a stroll and the perfect place to indulge the senses. If you’re staying in or around Bordeaux, it would be a shame to miss out on this remarkable testament to Aquitaine’s heritage.

Check Out our Famous Monk Tour of The Saint Émilion Appellation !

For more on the Bordeaux Wine Region, don’t miss the series ;

This website uses cookies to improve your experience while you navigate through the website. Out of these cookies, the cookies that are categorized as necessary are stored on your browser as they are essential for the working of basic functionalities of the website. We also use third-party cookies that help us analyze and understand how you use this website. These cookies will be stored in your browser only with your consent. You also have the option to opt-out of these cookies. But opting out of some of these cookies may have an effect on your browsing experience.
Necessary Always Enabled
Necessary cookies are absolutely essential for the website to function properly. This category only includes cookies that ensures basic functionalities and security features of the website. These cookies do not store any personal information.
Non-necessary
Any cookies that may not be particularly necessary for the website to function and is used specifically to collect user personal data via analytics, ads, other embedded contents are termed as non-necessary cookies. It is mandatory to procure user consent prior to running these cookies on your website.
SAVE & ACCEPT